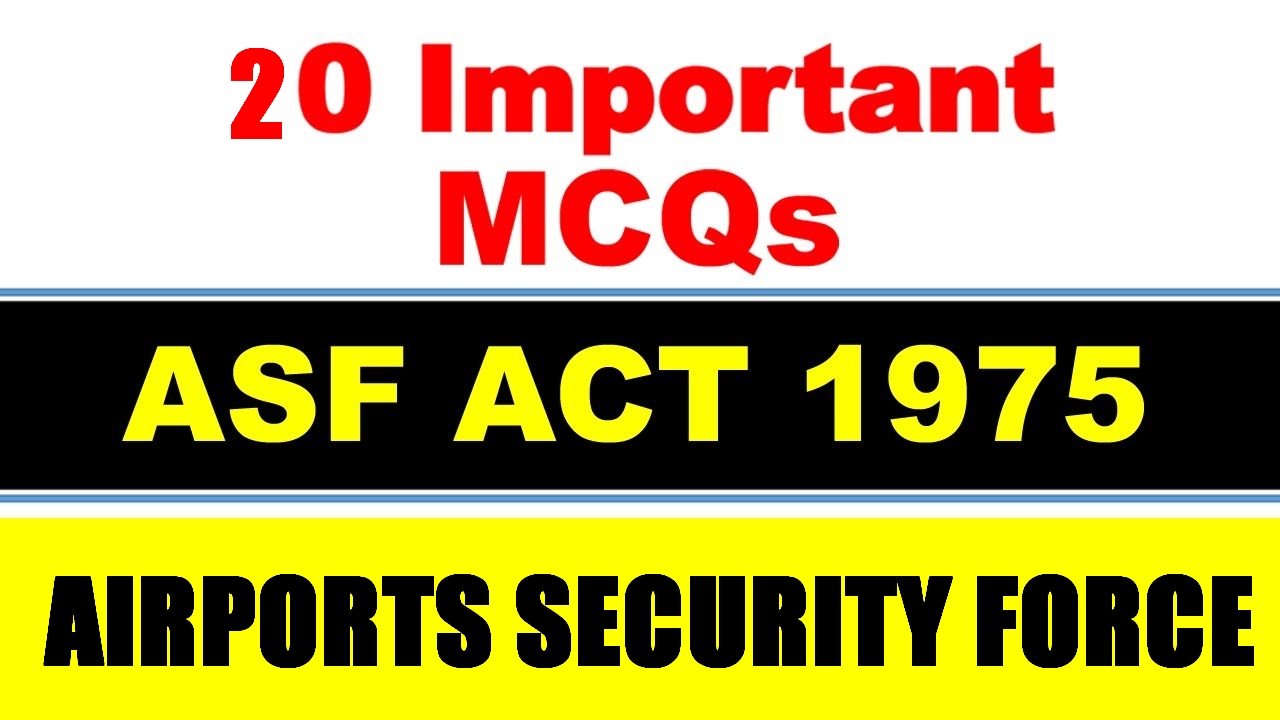 1. According to ASF Act 1975, the head of the Airports Security Force (ASF) shall be appointed by the
Ans: Federal Government

2. According to ASF Act 1975, who is head of the Airports Security Force (ASF)?
Ans: Force Commander

3. The administration of the ASF shall vest in the
Ans: Force Commander

4. The Force Commander ASF shall perform his functions under the general supervision of the
Ans: Director-General

6. Who is the current federal minister for aviation division?
Ans: Ghulam Sarwar Khan

8. Airports Security Force (ASF) is under the ministry of
Ans: Aviation Division

9. According to ASF Act 1975, who has the power to make rules regarding ASF?
Ans: Federal Government

10. As per ASF Act 1975, who has the power to make regulations regarding ASF?
Ans: Force Commander

11. The headquarter of Airports Security Force (ASF) is in
Ans: Karachi

12. According to ASF Act, 1975, the Aviation Division is headed by the
Ans: Aviation Secretary

14. What is the term used in the ASF Act 1975 for an area of land and water used for the purpose of landing, departure, and movement of an aircraft?
Ans: Aerodromes

15. What is the term used in the ASF Act 1975 for the movement area of an aerodrome, adjacent terrain and buildings, access to which is controlled by the ASF?
Ans: Air side

16. Airports Security Force (ASF) is in-charge of the security of all
I. airports
II. aerodromes
III. civil aviation installations
against acts of unlawful interference or threats of such interference.
Ans: I, II and III only

17. An official of ASF can search and arrest a suspect attempting to endanger
Ans: without warrant

18. An official of ASF can search and arrest without warrant of any person
I. suspected of endangering
II. attempting to endanger
III. having endangered
Ans: I, II and III only

19. Who is indemnified from suit or any other legal proceeding in exercising power which are in good faith and in accordance to the ASF Act given under the ASF Act, 1975?
(B) All members of ASF

20. What is meant by Federal Government in the constitution of Pakistan?
Ans: Federal Cabinet.