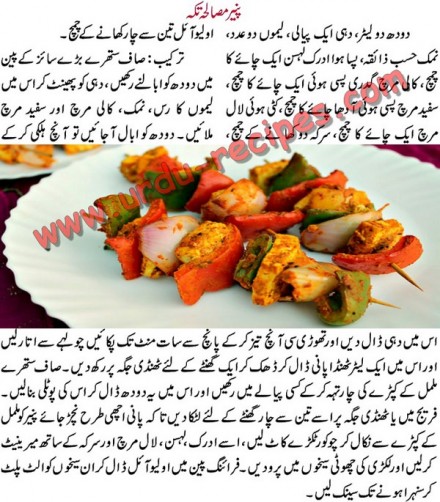 Are you wiling to try something new on the closest barbeque party? If your answer is yes, then go for paneer masala tikka recipe.

In this easy recipe, soft chunks of paneer are marinated in different seasonings and spices and then grilled along with veggies. Paneer is easily available item which you can purchase from local dairy shop or can make it by your own through a little struggle. I personally prefer homemade paneer than the ready-made paneer due to its freshness.

Read through the page to learn hoe you can cook restaurant like paneer masala tikka at home.

Pour 2 liters milk in a large pan, place on the stove and let it boil.
Mix lemon juice, black pepper, white pepper and salt in yogurt with the help of a fork.
When the milk comes to boil, add the yogurt-mixture in it while stirring and let it cook for five to seven minutes over medium heat.
After that, remove the milk from stove, add one liter fresh water in it and keep it at cool place for about an hour.
Strain the mixture through a cheese cloth and hang it in a cool place in order to remove excess water.
Take out fresh pander from the cheese cloth and cut it into square shapes.
Marinate it with ginger-garlic paste, red chili and white vinegar.
Thread the marinated paneer onto the bamboo skewers with the combination of your favorite veggies.
Take a little amount of olive oil in a frying pan, put the paneer skewers in it and cook over light heat until it becomes golden brown.
Your paneer masala tikka is ready now, place it in a serving dish and sprinkle a pinch ofchaat masala over it.
Finally, squeeze few drops of fresh lemon juice over the paneer masala tikka and serve hot.