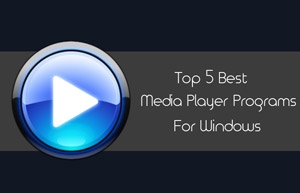 Many people loves to watch their favorite movies and songs on the media player that doesn’t lag or supports almost all video formats. Well, you might see Windows Media Player preloaded in your Windows operating system. It is basically not a great media player and it only supports few video formats like .AVI, .MP4 and WMV.

VLC Media Player is one of the best free media player out there. It supports almost every type of video and audio formats. It is one of the most famous and most downloaded media player on the internet. It is also available on Unix, Linux and Mac OS X. It is simple and easy to use and it can also plays the video directly from the streaming URL address.

GOM Media Player is also becoming famous nowadays because it also supports many popular video formats like VLC. The best thing about GOM Media Player is that it is light weight and also doesn’t require more system memory to play videos. This media player is also available for free. The user interface of the program is very simple and easy to use and also you can customize it.

The name of the program sounds too outdated but it is one of the best media player program that you can use to watch your favorite videos or movies. It is very simple and easy to use and you also don’t have to install any kind of codecs. It is very lightweight and it also doesn’t even affect your system memory. It also allows you to play many popular formats.

So, these were the list of top 5 best media player programs for your Windows. By using these media players, you don’t have to worry about the video’s format. If you have any better suggestion or question about this post then don’t forget to sing your song in the comments section. If you like this post then do share this with your friends and social circles to solve their problem too.